Well the 2012 season has come and gone, the final round at Loretta Lynn’s Ranch was finally here. The top rookie in the Pro Am Unlimited class came into the finale 3rd in points, but had 3 top riders hot on his tail. “I will do everything in my power to keep my 3rd place in points spot.” Said Janssen. “I want nothing more than one last podium appearance and a top 3 overall.” Janssen also went on to say that he wanted a strong showing in Pro Am Production to end the year. You will see the weekend went very well for the young Janssen Motorsports Roberts Racing Outlaws rider.

Saturday was the most important day of racing for Wisconsin rider Cody Janssen, his top 3 overall spot was on the line on this day. He could not afford anything but a stellar performance and he would deliver. In moto 1, Janssen found himself outside the top 5 on lap 1 but quickly made some passes to put himself into 3rd place where he would eventually finish. In moto 2 he came out of the gate in 4th, a little better than the previous moto but Sean Taylor, the rider he must beat, was in 3rd. Cody stalked Taylor for most of the race, before making the pass in the final corner before the finish line! This pass gave Cody 3rd overall on the day, and 3rd overall on the season in the Pro Am Unlimited class. “I knew I could make the pass. I was clearly faster in the section before the finish line; I set him up and made the pass in the last corner.” Cody said. “I’ve never been so pumped coming off the track. I think I was screaming in my helmet as I crossed the finish line. (laughs) Hugging and high-fiving my team, it was the best feeling in the world. I had been saying ‘earned not given’ for weeks and that’s exactly what I did, last corner, last lap, 3rd overall and 3rd on the year. I earned it!”

After a day like he had on Saturday, Cody knew his chances were very good on Sunday in Pro Am Production. “The pressure is off for me in (Pro Am) Production so I’m just going to go get a good start and show everyone what they should expect to see at every race in 2013.” The day started very well with the #25 Janssen Motorsports Roberts Racing machine qualifying 3rd overall in timed qualifying. Starting right where he left off, Janssen grabbed the holeshot in moto 1. He led a lap before giving up the lead to champion Cody Gibson. Cody was having one of the best races of his young career, running 2nd at the 15 minute mark, but with 2 laps to go a hose clamp broke, fried the motor, and prematurely ended Cody Janssen’s day of racing. “It’s a shame because I felt so good and there’s no doubt in my mind I would have been on the podium again today…On the bright side of things, I know I turned a lot of heads and showed people what I’m capable of. Overall I can’t complain about the way my weekend went, I came to secure 3rd overall in points and that’s exactly what I did.”

Cody Janssen finished the season 3rd overall in Pro Am Unlimited. He was the highest placing rookie and earned himself 4 podium appearances, 3 seconds and a third. “I got better as the season wore on as is probably expected of a rookie. My speed at the end of the year was at the top of the class and there is no doubt in my mind that I will be battling for wins and championships in 2013.” Cody lastly needs to thank all of his sponsors: Janssen Motorsports, Phil Buerster, Roberts Racing, Elka Suspension, ITP tires, Oshkosh Tattoo and Good Girl Piercing, Quadtech, ESJ Graphics, DWT, Hardkor Engineering, Rath Racing, JB Racing, Corey Garrison(Parts Unlimited, ThorMX, 100%), Dragon Alliance, Renthal, Kalgard, Motoworks, Hinson Clutch Components, CP Pistons, KIK ATV Racing, DP Brakes, P501, Thede Photography, and everyone else that has helped and supported me, thank you and God Bless. 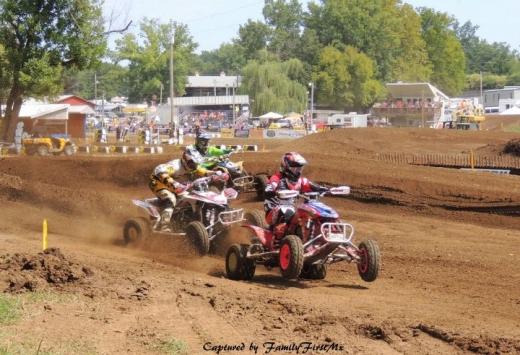