David Knight wins at Tong to make it two from two.

Manxman Knight came into the event on his 2015 KTM 300 EXC two-stroke machine as favourite, brimmed with confidence from his performance at the Heads of the Valleys championship opener in December along with currently sitting second overall in the FIM SuperEnduro championship.

With the Parkwood Off-road Centre familiar to most of the riders, the course was adjusted and extremely tough compared to previous events held there; fairly short in comparison to the first round in Wales, but still intense with no place to rest.

With the Pro, Expert and Clubman riders setting out at 12.30pm for two and a half hours, Knighter made sure he was first into the rocks and first out, closely followed by Spanish Pro Mario Roman. Jack Edmondson steered his Leisure Trail KTM UK machine clear of trouble to be the third rider through as riders piled up behind him and struggled to get untangled, giving Jacko a small break and a relatively clear track.

Eurotek KTM mounted Paul Bolton (also sponsored by DP Brakes) soon made up ground and moved into the top three but by the end of the first lap Knight had complete control. As he closed on backmarkers, the going became more difficult in places and the big Manxman worked hard to steer clear of trouble, even finding a big rut to struggle with for a while.

Bolton closed significantly on Knight at the three-quarter point of the race but David simply stepped up a gear and eventually pulled a three-minute lead to take a very well deserved victory to make it a KTM 1-2. Jonathan Richardson finished in third.

With the victory sealing the ACU British Extreme Enduro Championship, David Knight said: “That was spot on. The first event in Wales was totally different with a new venue and long laps; so unexpected to all the riders. I ended up beating Graham Jarvis there – who is arguably the best extreme endure rider in the world – by 10 minutes, so that was obviously great for my confidence and a great start back on KTM.

“But this event was so different. Everyone is relatively familiar with the course, but it was a lot wetter than usual and it was the toughest race held here for years. It was really claggy; a struggle to clear the tyres of mud. It was hard to keep a rhythm, as there were a lot of riders getting stuck in places so I couldn’t keep a line. But some hard time on the bike is always good.

“It’s great to get another British title and we’re only in January! To win both races against some top racers is mega. It sets me up well for the next SuperEnduro round in Finland this weekend and I’ll keep working hard for the rest of the year.” 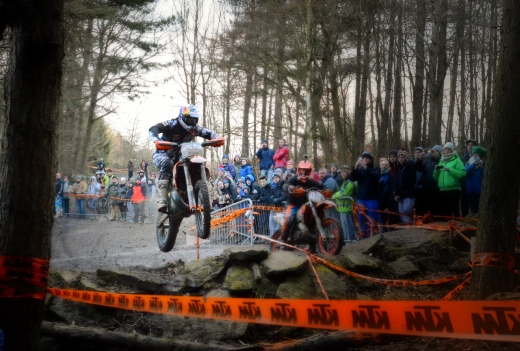