David won Round 1 of the series, a British Extreme Championship, back in February. Rounds Two and Three were super sprint events, which are held over 8 laps each day. The special tests were held on an excellent hard packed surface which had a little bit of everything from fast MX tracks, to woodland and endurocross.

David started Day 1 by winning the first test by 16 seconds from Jordan Rose, he then extended his advantage winning all 8 tests throughout the day and took the win by 1 minute and 8 seconds from Rose, with Danny McCanney 3rd, just 2 seconds behind.

For Day 2, the test was altered in a couple of places by organiser Paul Edmondson, which made the test about 15 seconds longer. David was on a mission again, winning the first test by 16 seconds from McCanney and winning the remaining 7 tests, extending his lead to 52 seconds at the finish. It made it a very successful and enjoyable weekend ahead of the next EWC events, in Spain and Portugal, in a couple of weeks time.

David Knight:
I can honestly say I have really enjoyed this weekend. Rogershill is an excellent venue and gave me the perfect opportunity to give myself and the Honda a good shakedown before the European part of the EWC.

The test itself was pretty fast going, using both MX tracks, a little woodland, endurocross and fast open going. From the first test on Saturday I felt good but improved every lap, getting more comfortable and more confident as the day went on. It was good having Danny and Jordan there too as we all pushed hard and it made it really enjoyable as there was no rest during the 8 minute special test.

I changed some things on the bike during the day which is perfect as you see straight away if it is good or not. Some things we tried were an improvement and some things were worse. For Sunday we took the good things from the previous day but also tried forks with a different setting and straight away they had a better feeling so I stuck with them and didn’t touch a thing. My times again got better and better and my best time on Sunday was three seconds slower than Saturday, but the changes to the track made the test 15 seconds longer so really I knocked about 12 seconds off Saturday’s time which on that type of test is massive as it was so fast.

All in all I’m very very happy with how it went, I pushed hard all weekend, didn’t make any big mistakes and won all 16 tests, the bike is great I’m getting more confident race by race and now hopefully I can get a podium in the next GP.

Thanks to my sponsors and to Fast Eddy Racing for an excellent and fun race weekend and I can’t wait for the next round at the end of June which is a 3 hour race. It’s great having a championship with a mix off events like this. 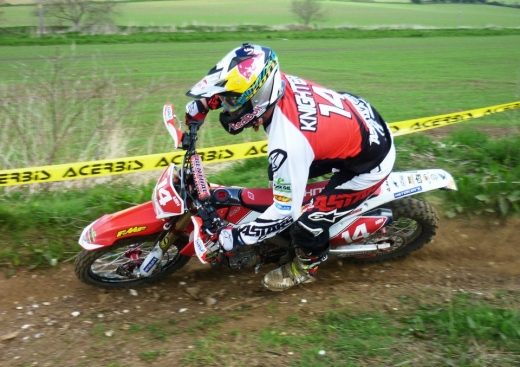