Rounds 4 & 5 of the British Sprint Enduro Championship took place on the English/Welsh border at Llangrove near Monmouth and again the riders were greeted with hot,dry conditions. This made the riders work extremely hard on the challenging track. After securing the Youth Enduro World Championship in Romania a couple of weeks ago, Jamie McCanney chose to ride the 250cc two stroke in the Elite class mixing with some of the worlds top enduro riders such as Factory Husqvarna rider, Matti Seistola, Factory Gas Gas rider (and brother) Danny McCanney, Daryl Bolter, Tom Sagar, Jordan Rose, Tom Church & Jamie Lewis. Danny McCanney set the early fast pace closely followed by his brother, Jamie & Matti Seistola. Jamie was then the fastest in the next 2 tests but the winner would be one of these 3 riders as on test 3 only 3 tenths of a second separated them! The eventual winner was Danny McCanney who won by 12 seconds from Seistola with Jamie McCanney 8 seconds behind in 3rd place. On Day 2 the course was reversed but the weather remained hot & dry. Early mistakes from both Danny & Jamie McCanney meant that Seistola had an early lead with consistent good lap times from Jamie Lewis put him in the mix for the lead. Then on lap 3 Seistola crashed & stalled his bike costing him valuable time which put Jamie Lewis temporarely in front. At the end of the day Seistola won by 14 seconds from Danny McCanney with the Jamie Lewis getting 3rd place from Jamie McCanney by 2 seconds. Tom Church rode consistently for 6th overall in the Elite class.. In the Youth 125 class Lee Sealey rode well to finish 2nd overall. Jane Daniels & Hannah Styles made it a double podium for Midwest Husaberg riders in the Women’s class finishing 1st & 3rd respectively. 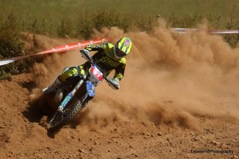