Ty Tremaine had already locked up the Junior Championship from the previous round. Ty qualified and raced in every Pro main event this year.

“I was amazed that Ty qualified for every main event” said team owner Mike Hurlbert. “We know he is fast and strong, but usually it takes time to develop skills to be there with the top 10 pros in the world. Ty is only 19 years old and he’s put out the effort and his results are showing that.” Ty is the first American rider in history to win the FIM World SuperEnduro Junior Championship.

“I’m super excited to have accomplished all that we did this year”, mentioned Tremaine. “None of it would be possible without everyone on the team, and I’m grateful for everything they’ve done. It’s awesome to get another title under my belt.”

Rachel Gutish needed only to beat Sandra Gomez by one position to win the Women’s Championship. The odds were in Rachel’s favor, having won the last 3 out of 4 events. When the gate dropped, Rachel shot out front with Sandra close behind. Rachel made a small mistake which allowed Sandra to get by. “Rachel was so close” said Hurlbert. “She has honed her skills and over time will be a future champion. I vowed to Rachel that we will work together and get that championship in the future”.

“While this may not have been the result I was looking for, I’m proud of all we accomplished,” remarked Gutish. “We won a several races just missed out on the title. We’ll be back!”

In the Pro class, Cody Webb began the night with a 10 point cushion for the Championship. The main event jitters ended when Cody got past a first turn pile up and worked his way to the lead the first few laps. Cody rode conservatively, and fellow KTM rider Taylor Robert passed him to go on for the win. Webb needed only a top 3 to clinch the title, and things became close when championship contender Colton Haaker closed in. Cody rode smart lines eventually capitalizing on Haaker’s mistake to take a 2nd and claim his 2nd Endurocross championship. “That was a heck of a race,” commented Hurlbert. We are so happy for our team, sponsors, friends, fans and family”.

“I had a small cushion coming into the final race and I knew I had to be near the front to clinch the championship”, mentioned Webb. “Practice and qualifying didn’t go as well as I had liked, but I was able to put it behind me and get the job done in the heat race and the main event where I placed second. I can’t thank the RPM Racing Team enough for their support this year and I am so glad we achieved this championship together”

Next on our team race calendar is the first round of the 2016 FIM SuperEnduro World Championship round 1 in Poland for Ty Tremaine on December 6th. 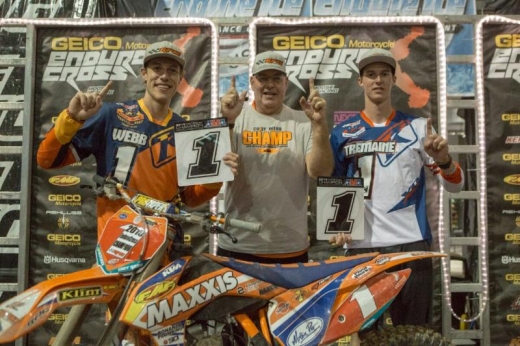