Arriving at the next round on a high after the results from the European, Tom was in good sprints and was looking forward to the two day event. Dirtbike Action had worked hard to provide two challenging tests, the longer test looked to be around the 6-7 minutes, with the second test a blast between the trees about 2 minutes long.
Day one Tom posted a fast time of 5.31.0 taking 7 seconds out of his nearest opponent Daryl Bolter. Tom proceeded to post the quickest time on the second test taking a further 7 seconds over second place. Tom continued to ride hard in each test, setting fastest times on every test throughout the day. Opening his lead over second placed fellow KTM rider Daryl, Tom finished the day 53.4 seconds ahead of the field.
Tom commented “I’ve had a brilliant day, the tests really suit me and the bike, day two will be interesting as the course has started to cut up, I don’t think the times will be as quick. I just hope I can do the same tomorrow, and extend the championship points just that little bit further”.
Day two Tom set the fastest time on the test pulling a 6 second lead, showing the same strengths as on day one, Tom won all tests on day two. Daryl had made some setup changes over night and had moved closer to Tom, closing the gap to 25 seconds over the day.
Tom commented “I’m really pleased, I’m happy with the way I’m riding and just enjoying myself, no pressure”.
After four rounds of the championship Tom currently leads with maximum points , the next rounds being held in Knighton Mid Wales on July 13th and 14th. 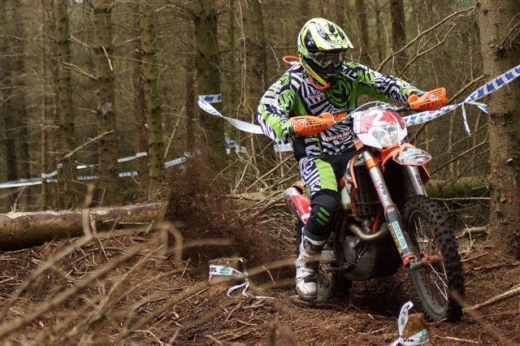