Tom Sagar wins in Italy at the opening round of the European Enduro Championship in Bussi sul Tirino, Italy

Home | Race News | Tom Sagar wins in Italy at the opening round of the European Enduro Championship in Bussi sul Tirino, Italy

Portugual’s Luis Oliveira won the Premier on a 250 4T Yamaha by 5.9 seconds ahead of local hero Mirko Gritti on the big KTM. In the E1-class Italians Maurizio Micheluz was the runner up and Maurizio Gerini was 3rd. KTMs Tom Sagar won the E2-class in front of the Italians Andrea Beconi and Edoardo d’Ambrosio. The E3 class was dominated by local riders. Mirko Gritti, Gianluca Martini was 2nd and Vanni Cominotto was 3rd. With more than 35 seconds in hand, Austrian Werner Müller won the Veterans-class ahead of France’s Laurent Pannetier. The Best junior was the only 19 year old Oliver Nelson from Sweden: The Husaberg-rider rode with his 125 bike to the 13th place in the overall! Jamie Lewis finishes 7th after a crash trying to overtake two slower riders in the Cross Country test. Lee Edmondson was given a 60 point noise penalty. The penalty puts him down to 15th in the E1 class. A second test passed the bike and the penalty will be disputed. Jack Rowlands was 4th in E1 juniors and Rob Johnson was 8th. Josh Gotts 14th in U20’s On Sunday Tom Sagar won the E2 class and the overall. Jamie Lewis was the E2 runner up. 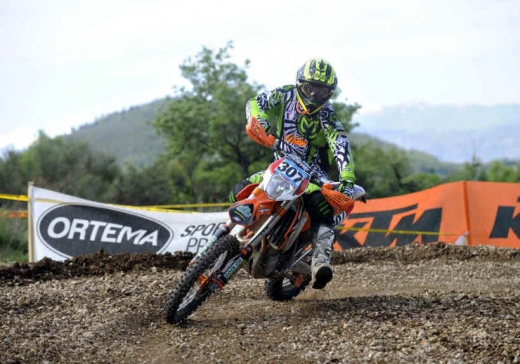