Most impressive was his win in the second final where he took the chequered flag by just under 20 seconds. Starting the day with timed practice, David went straight to the top with the fastest time by almost 2 seconds from Taddy Blazusiak. In the second practice Knighter was heading for the fastest time when a slower rider held him up but still scored the second fastest time, missing out by less than 100th of a second.

Confident and comfortable for the three 10-lap finals, Race 1 started in the worst possible way for David when his gate failed to drop and his front wheel became jammed. David set off dead last and sliced his way through the pack at incredible speed up to third place, catching the leaders, when he made a mistake and dropped back to fifth, where he finished. Very frustrated and with the adrenalin pumping, Knighter started Race 2 from the second row as the start order is reversed. He held nothing back, and got to the lead on lap three and never looked back. Stretching the gap to just under 20 seconds at the flag and winning his and his Honda team’s first world championship event.

In Race 3, David got a good jump out of the gate but got wheel spin on the very slick dirt and after a mid pack start passed a number of riders, but with the leaders having already stretched a big lead. Not giving up he got to fourth and still catching the guys in front David set sights on 3rd when a few small mistakes made him realize it was better to just ride the race out for 2nd overall.

David Knight:” I am very happy with the overall result here in Spain, from the word go my lap times were fastest which is important for the outdoor EWC, but winning the 2nd final was brilliant for the team and myself, especially with all the top riders present. I’m disappointed about the first final as my gate clearly didn’t drop, (there is video evidence) but they didn’t stop the race which was not on so I had to fight from last, I got to 3rd or 4th but after 5 laps I had burned myself out having to ride so hard, and also the track was very difficult to pass and I made a mistake dropping me to 5th but what can I do.

On Final 3 I was a bit careful around the first couple of turns and got boxed in and had to pass lots of guys again which was tough but I was catching the leaders in 4th but I was having to push a lot which was very risky as the track was very slippery so decided a few laps from the end to just settle for 2nd overall which puts me in second overall in the championship.

It’s been a good event so thanks to the organizers but a big thanks to Paul Edmondson, Nick Ward and Gav Hunt for their brilliant work today and it shows our Honda and our Team can win against the factory teams already, in only our second race.
Also a big thank you to my sponsors who have made this all happen. 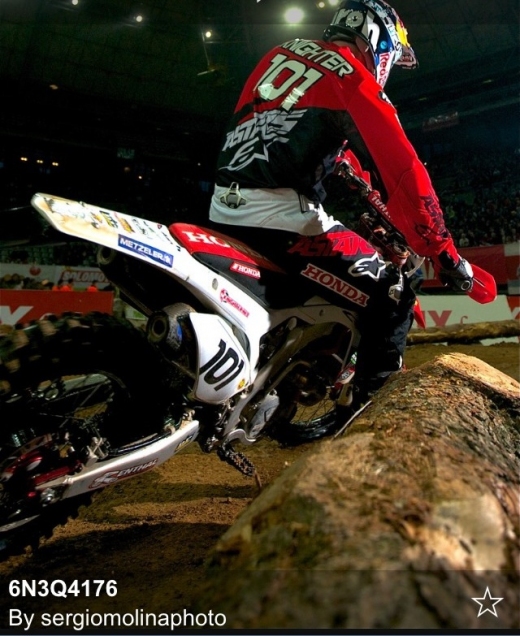