Knighter forced to retire from the GP of Spain

Knighter.net Honda rider David knight had his hopes of a podium result in the GP of Spain dashed on the very first liaison section. While following a few other riders who had started in front, but got lost in the dusty conditions, David hit a big hole that was caused from the heavy winter floods and injured his right thumb and left wrist. While David continued and rode the first special test in severe pain and half of the second time check, he was left with no option but to retire from the weekends race. He flew back to Manchester on Sunday and has visited top hand specialist Mike Hayton, where he has undergone X-rays and MRI scans for most of the day.

David Knight:
What can I say except how disappointed I am, not only for myself, but for my team helping and supporting me. After such a brilliant week of riding and training in the area, I felt I was riding better than I have for many years and honestly had a podium in sight. To be so happy and confident going into a race has taken a long long time to come back after 2 years of hard knocks, but I felt last week it had returned. To be riding along in second gear behind the others at about 5mph in dust and hitting a big hole that I just didn’t see makes it even more disappointing.

I knew straight away I’d done something bad to my thumb. I continued to the first timed test, rode around it as best I could and didn’t do a bad time considering the pain. I refuelled at the service and continued hoping it would settle down but after another 15 mins riding I knew it wasn’t possible to continue. I returned to the paddock very disappointed, probably the most disappointed and upset I have ever been as we have been working so so hard to improve myself and my set up and we have definitely made a big step forward, unfortunately we didn’t get a chance to show it.

My hand was like a balloon so after speaking with my physio and doctor, we decided to get to Manchester and see a specialist as this type of injury can be very serious. Today (Monday) my thumb feels much better as I’ve been icing it as much as possible, and I have had X-rays, MRI scans and an injection, thanks to Mike Hayton who is the best hand surgeon in the country. The X-rays were clear and I’m awaiting MRI results now. I’m confident with what Mike has done and found today and hopefully I will race Portugal this coming weekend for myself and my team of guys and sponsors who have worked their arses off for me, so 100% fit or not, I’ll do my best as I know I have to pace and equipment to get on that podium.

I’ll do my best this weekend to get a result and look forward to being 100% fit and fight for the win in the coming rounds. 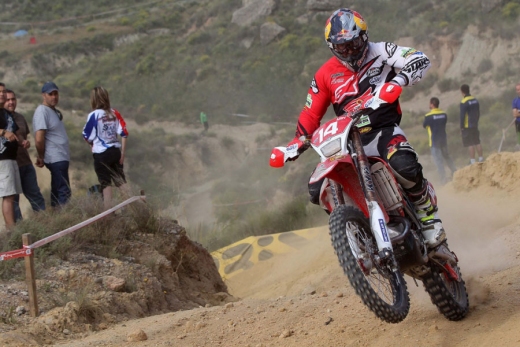