Sagar scoops win at first round of the Welsh enduro championship. Llyn Y Waun Enduro, first round the championship was hosted by Builth MCC based at Hundred House Mid Wales.

The enduro followed a simple figure of eight course approximately 15
miles long, using both forestry and moorland.
Tom was the first man off the start, followed by Carl Jones and Joe Chambers, these three completed the championship class.
A short check through clear fell woodland, would test the riders ability as the check tightened from 25 minutes down to 13 minutes. Tom set out to ride the check, knowing he would have to push the clear the check on lap 5, luckily the times proved not to be too tight and was going to be a enjoyable ride for all competitors.

The first lap around the special test was untimed and was virgin ground. Tom commented “The test is good, it’s going to be interesting, there’s a few tricky off camber sections, and the fern is proving very slippery”.
The first timed test Tom pulled out a 17 second lead over Carl Jones. The second test, Tom struggled for grip on the first half of the test, over the ferns but extended his lead by a further 3 seconds. Tom went onto win tests three and five, test four Tom’s bike slid from under him, costing him a four seconds. Tom finished the day clinching the win of the first round of the championship.
Tom commented “what a cracking event, simple layout, all viewable for the support crews. The test was mega, it was a shame I struggled for grip, I think it suited two strokes better today, I’m pleased that I was able to take the win, the bike is superb. I’m ready to head off to the first round of the Europeans now, and see how my luck holds out. Thank you to all my sponsors and family for their help so far, well done to all at Builth club for running a well run enduro. 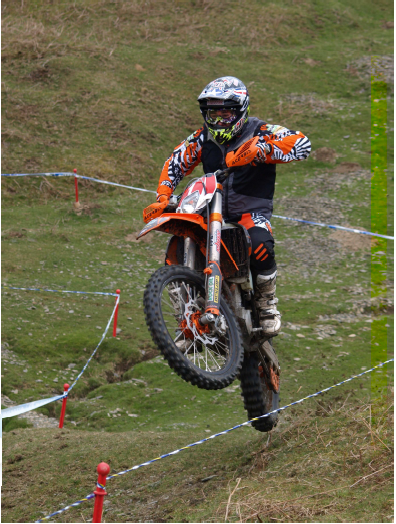